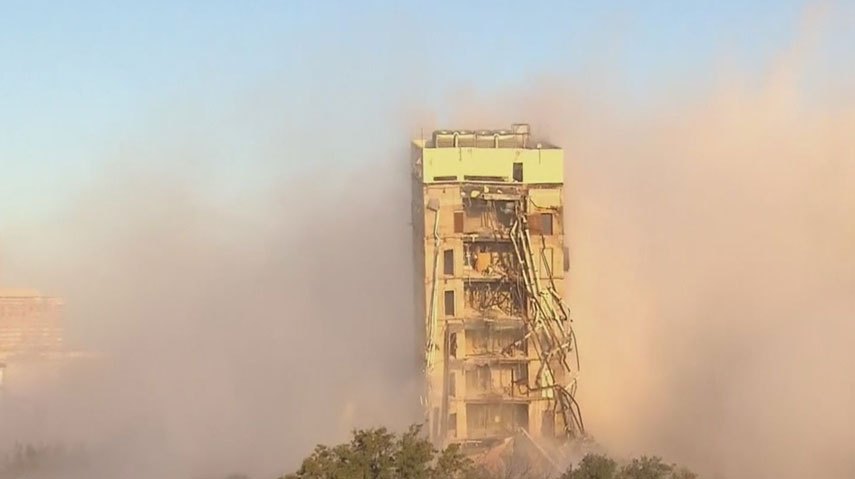 The structure should descend Sunday morning, yet a bombed destruction left it with a particular tilt — and epithet: “the leaning tower of Dallas.”

The implosion by Lloyd D. Nabors Demolition was a piece of The Central, a 27-section of land, $2.5 billion advancement venture that will bring a place of business, an inn, diners and different comforts to a territory only north of downtown Dallas, The Dallas Morning News detailed.

Be that as it may, almost 300 pounds of explosive wasn’t sufficient to topple the old structure on the improvement site, said Steve Pettigrew, leader of Pettigrew Inc., an organization associated with the destruction.

Pettigrew accused timing, saying the structure, which has a solid and steel center, “uncovered itself” too rapidly during the implosion, Pettigrew said.

“The skirt fell off the center,” they said.

What was left is 35 feet shorter and posting at 15 degrees, Pettigrew said. The rest of the structure — which a Lloyd D. Nabors representative said is “securely contained” inside the place of work — will be obliterated later with a crane and a destroying ball, Pettigrew said.

Meanwhile, a huge number of clever photographs demonstrated individuals out yonder claiming to lift up — or push over — the inclining tower.

One picture taker, Lauren Armstrong, said that she’d never been to the Leaning Tower of Pisa yet that now they didn’t know they expected to.

“Here it is,” they said. “Dallas carries the inclining tower to Texas.”

Lloyd D. Nabors Demolition will cut down what survives from the 11-story assembling in the not so distant future, the organization disclosed.